for their learning program. I was drafted in as the UX design lead, to conduct wireframing &

"Thank you for engaging so well with the young people, many of whom have experienced a range of difficulties throughout their lives"

The Zen Agency had been approached by the Princes Trust to design 2 app concepts and they required an experienced ux designer to come on board. I went through several stages of the bidding process as a freelancer, which I ended up being successful for to shortly after join the design team to start work. 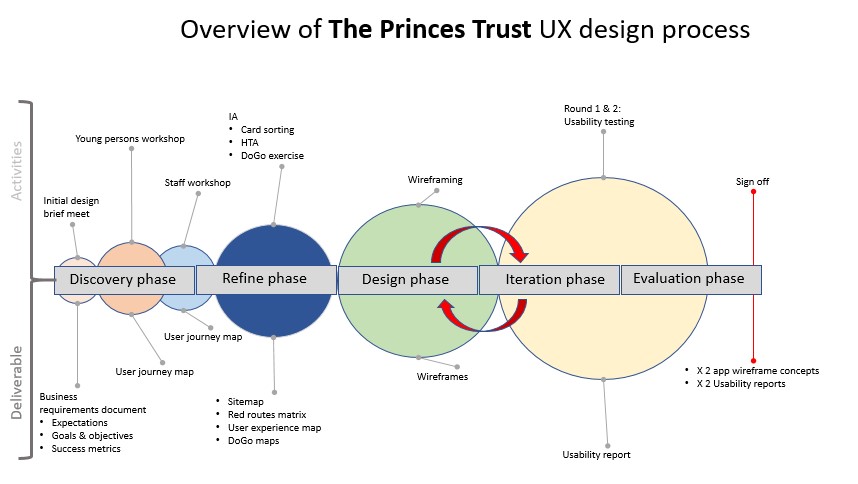 The client was approached by the Zen Agency, where I was hired as the UX Lead, to carry out usability testing, provide reports after 2 iterative cycles of the design process and advise on design decisions from a user-centred perspective. We followed Agile methods and practices throughout due those uncertainties involved with a new concept design.

Design brief: 2 produce 2 wireframe deliverables that have been tested after several iterations.

A stakeholder workshop was carried out to establish scope and objectives. User requirements were taking shape, where different personas and journeys became clearer. Some main questions arose from the workshop that informed the design stage of the process. 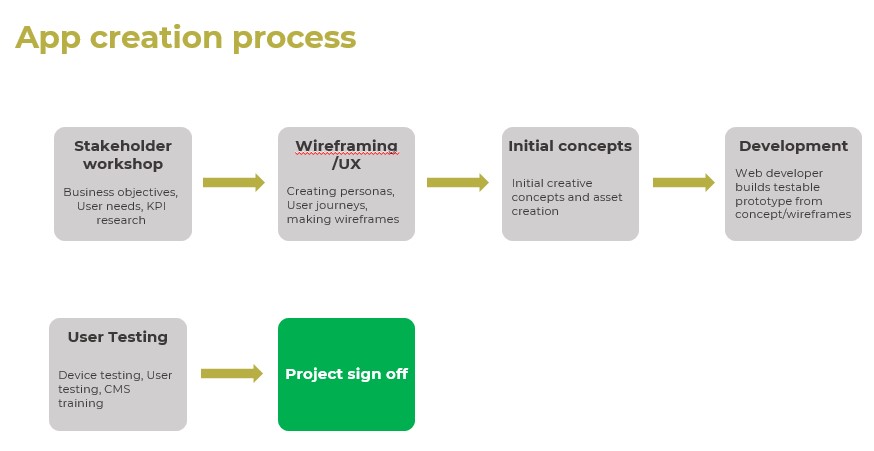 at this point we required more information from the client about the staff member users. A workshop was planned for a small group of 12 members of staff, however only a handful turned up on the day, so the data from those workshops needed to be triangulated with other data for it to be relevant.

After any misunderstandings were cleared up around what had to be delivered, I collected all the information and started to produce several personas based on the app concepts. Due to the nature of vulnerable groups, I decided data would be better collected from real users in an informal chat session, recording data in the form of notes, while building trust in a less direct manner. I was congratulated by Marc at the Princes Trust for connecting with the young people at such short notice under challenging circumstances. 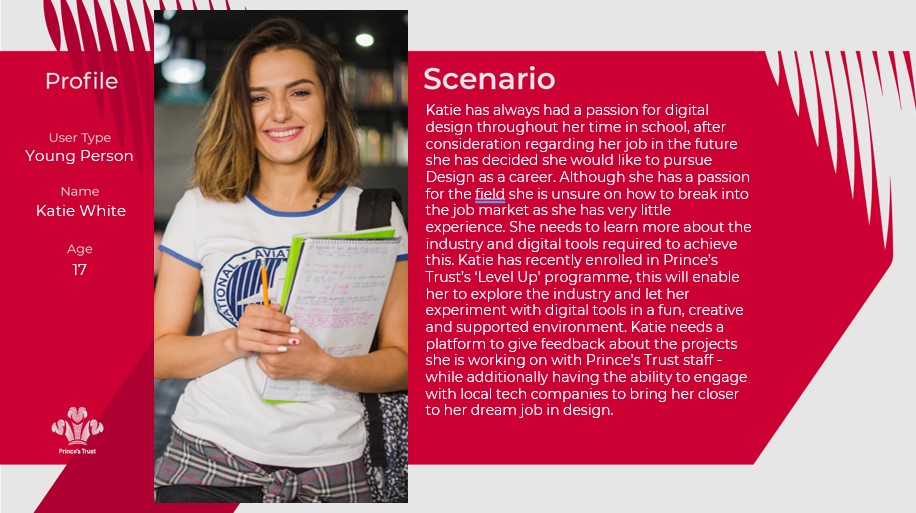 We needed visual wireframes to test with users, and at this point we needed to create user flows. Here I started to determine the users objectives based on all the data we had, gathering feedback from the client where necessary to counter any assumptions we had at this stage. This is where we marked out the user steps using a whiteboard to give a greater understanding of the target groups needs to complete their tasks. 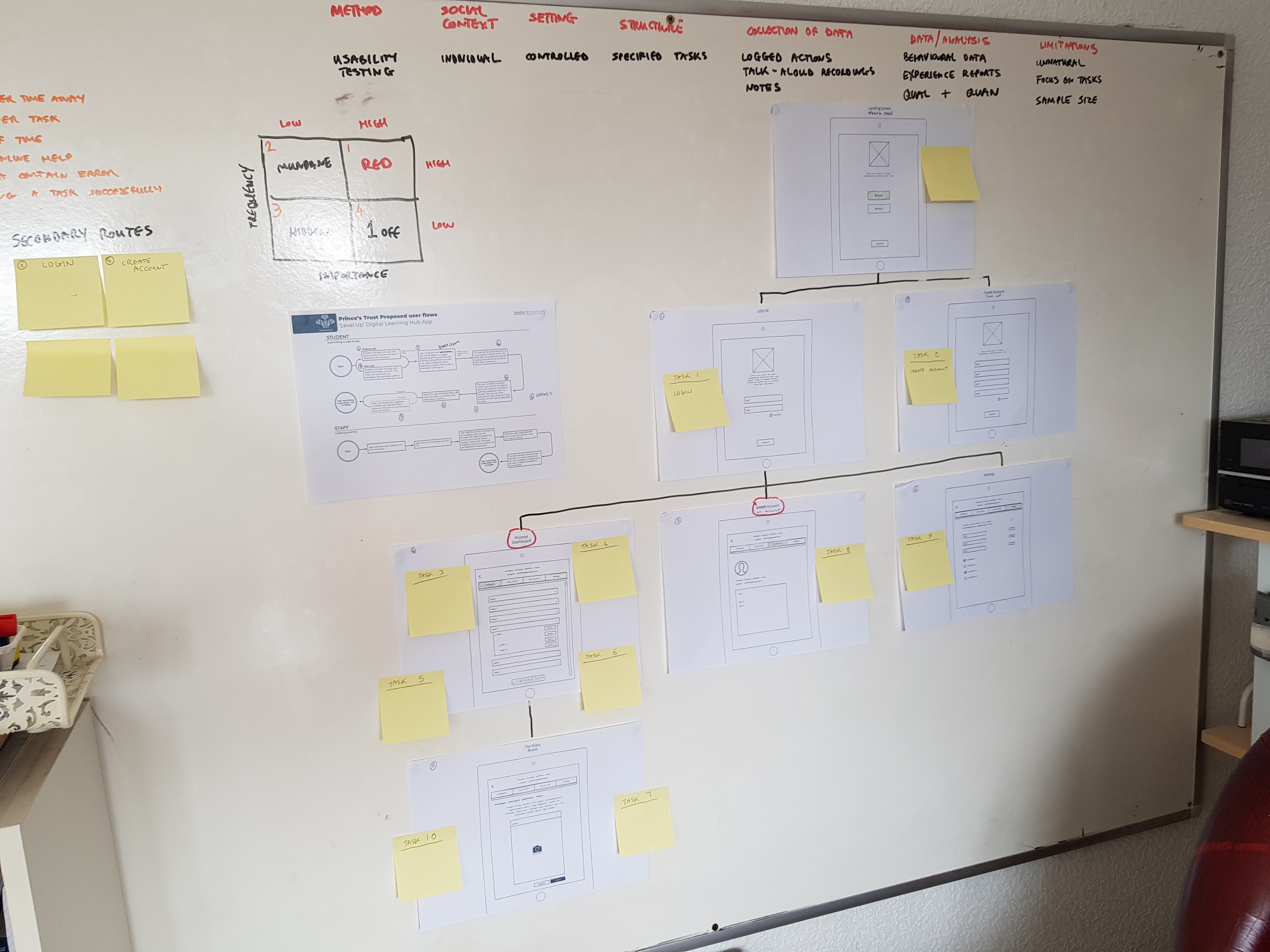 At this stage the design team and I created wireframes using Adobe XD, however one of the concerns i had was the lack of fidelity when it came to testing the wireframes with the users later on. Here I proposed that we run through a series of role-playing activities, where multiple narratives were devised to pick up any minor usability issues ahed of the usability tests. 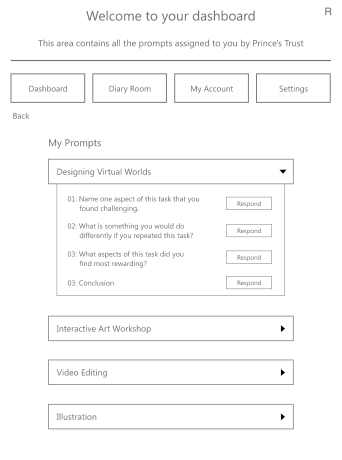 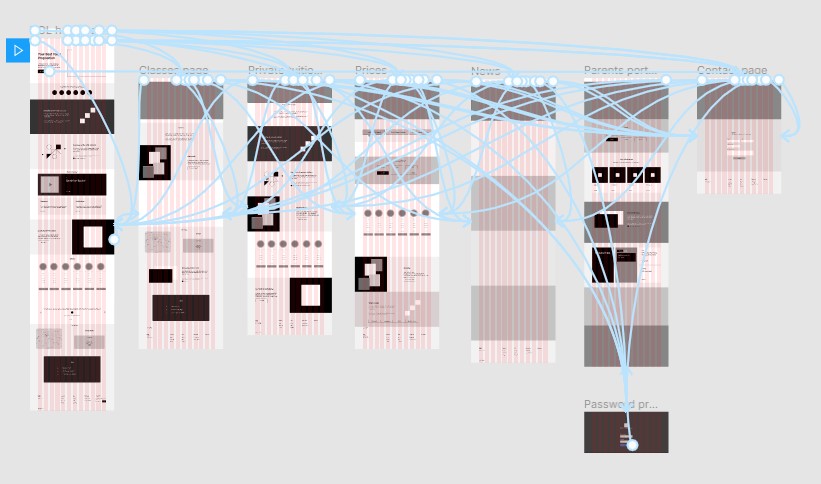 Usability sessions were planned and ready to take place at the Princes trust lab, however due to the impact of Covid-19 amid safety concerns, I had to rearrange how we could get data from usability sessions with the available resources and restrictions placed upon the design team. I decided it was best to carry out unmoderated usability sessions with young people, with the expectation of low response rates. at this point I comprised new task scenarios based on the new format of usability sessions. Alongside this I had to look at new software that could meet both business and user needs. After everything into consideration, I used a combination of lookback mobile screen recording software, google survey for instructions and adobe XD for interactive wireframes. A think-aloud face-to-face usability session as per original plan could not be conducted anytime soon.

The usability plan had several aspects to it, below are a collection of some documents relating to the original plan and the revised plan due to covid-19.

We knew that a combination of deadlines and disruptions meant we were never going to obtain valuable face-to-face usability data, however, with the time we had, I managed to extract as much data as possible to inform design changes. Below are some of those main findings. 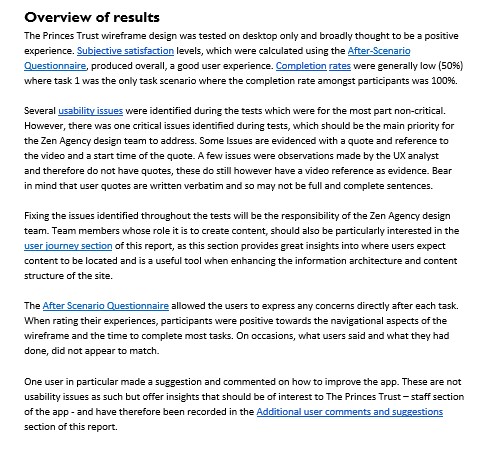 Collaboration: As a fully reflective autonomous practitioner, I was aware at times that my communications increased with the more time i invested with the product and users. What does this mean exactly? There comes a time when your passion for a project and determination to produce great work can over spill into over-enthusiasm, and this is where I learned that I have limited time with each project or stakeholder and that prioritisation is key.

Questioning: I learned afterwards that although I asked lots of questions to establish understanding, moving forward, I would ask why a lot more often to get to the crux of the problem, even if i can be guilty of being agreeable or wishing to avoid awkward questions. My concerns around building products on assumptions exceed that of the ego.

Minimalist design: Another important lesson i learnt on this project, was the challenges around scope and the importance of simplicity. I found myself often increasing the scope only to have to apply a minimalist approach later on.

Lean UX: I often learnt the hard way, through trial and error, which took too long and cost much more in time and finances. During each sprint, I developed a more efficient way of working, introducing more rapid research as i went along.

Content: I underestimated the time it would take to write top content and what I have learnt is that a copy-led strategy must take a higher priority, avoiding lorem ipsum and the formulation of structured frameworks and roadmaps to chart progress. Instead of a content plan taking place at one point in similar projects in the future, the change I would make would be to adopt a content first approach at every stage of the design cycle, testing regularly.

Quickest way to get in touch